On the seventh night of Hanukkah, we were horrified to learn that a man had entered a rabbi’s home and stabbed five at a celebration in Monsey, NY. Our hearts go out to the victims, their families and the Jewish community of Monsey. The Monsey attack is one of several antisemitic incidents that happened in New York and New Jersey before and during Hanukkah. We cannot allow this to be accepted as some sort of new normal.

Join us to show the communities of New York and New Jersey that we stand with them. Come to Jack Poole Plaza this Sunday at 11:00 a.m. for a group photo that we will share with the Solidarity March organizers and members of our extended Jewish community in the Tri-State area. It’s a small act that we know will mean so much to them. Check our Facebook page for the most recent information about the Sunday event. We will be there, rain or shine, and we hope to see you there. Please arrive a few minutes early, as we will take the photo promptly at 11:00 a.m.

Like many of you, we proudly shared photos of the lights of our menorahs on social media. The mitzvah of Hanukkah is not simply to light the candles but to display them. This year, we not only placed them in the window, we showed them to the world. Behind every post is a person, a family, or a community organization that is standing against hatred.

Taking a stand is exactly what Gabriola Islanders did yesterday afternoon. We were heartened to see so many people come together for a lantern vigil in front of the camp. Elected officials, community leaders and neighbours attended. The graffiti has been painted over with vibrant, beautiful colours, but that is not the end of the situation. RCMP has launched an investigation, and our director of community security will be visiting the camp to conduct a security audit and make recommendations to the camp.

Two weeks ago, when we first wrote about the graffiti found at Camp Miriam, we made the point that symbols matter. So do gestures of support. As we start a new month, a new year, and a new decade, let the Hanukkah we just celebrated be a reminder to each of us throughout the year of the work ahead, of the impact we can make together, and of the importance of standing together as we lead with light. We hope to see you at Jack Poole Plaza at 11:00 a.m. for the photo. 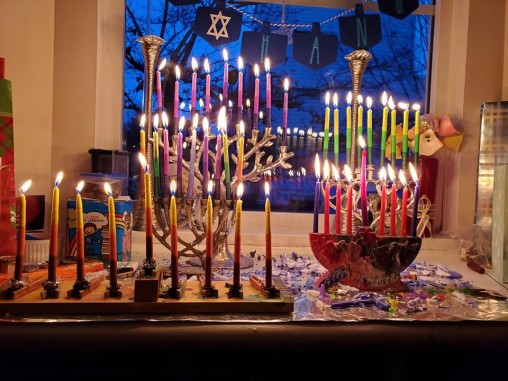