This message has 712 words and will take about 3 minutes to read.

The snowfall today served as a reminder that the way we see the world is a choice we make every day. Young children were delighted: “I’ve been waiting for this all year!” While many adults were stressed or annoyed by the extra time it took to clear off the car or walk to the bus stop. I don’t know when so many of us got cynical about the wonders of nature, but I suppose that’s adulthood for you. It often takes a child to snap us out of it.

Wouldn’t it be a gift if this Shabbat we could reset our perspective and, as Rabbi Abraham Joshua Heschel once said, “live life in radical amazement”? “Everything is phenomenal,” he said. “Everything is incredible; never treat life casually.”

As members of a closely-knit community, we know all too well that wherever and whenever tragedy strikes our fellow Jews, we feel it personally. They are our extended family. It is the same in the local Iranian community, which is reeling from the sudden loss of so many of their loved ones aboard flight PS752. We wrote a letter of condolence to their community yesterday, which you can read here. Actions matter, and we hope you will take action by sharing this on social media, so that as many people as possible in the local Iranian community can see that we are reaching out and that we stand with them.

The action we took last Sunday mattered, too. Hundreds of us stood against hatred and with the Jewish communities of New York and New Jersey during the Solidarity March. We gathered for a group photo that we shared with organizers of the march and on social media. We were very proud to see so many people participate in this meaningful gesture, including so many young adults from our Axis program and from our partner, Hillel BC.

One of those who came was Sam Heller, and we want to wish him all the very best as he moves on from his role as executive director of Hillel BC. Sam has been a true partner in every sense of the word, and it’s been a pleasure working with him. Sam brought to the work his own experience of being a student at UBC, as well as strong commitment to Israel advocacy on campus.

It was announced this week that Rob Phillip will be stepping into the role of CEO of Hillel BC, and we want to give him a warm welcome.

Rob isn’t the only new professional at Hillel this week either. Over at Hillel International, Adam Lehman was appointed the new president and CEO. Hillel International engages hundreds of thousands of Jewish students on more than 500 campuses across 18 countries, and Adam will have the responsibility of leading the organization through an historic phase: the start of its second century. I was the student president of Hillel at the University of Hartford, and I can’t wait to see what’s next for this great organization.

Our children and other family members are often the impetus for us to take a less casual approach to our health, especially when it comes to diseases and disorders to which we and they may be predisposed. We were proud to support the One in Forty event that took place at Beth Israel on Wednesday, which featured a keynote address by Libby Znaimer, the national spokesperson for Pancreatic Cancer Canada, and a panel discussion about hereditary genes, screening and insurance. Kol hakavod to Jane and Catriona Remocker for spearheading this important event.

This topic is of particular importance to our community, because genetic pre-disposition to certain illnesses is disproportionately prevalent among Jews. Our advocacy agent, the Centre for Israel and Jewish Affairs (CIJA) has been very active in this area and made preventing genetic discrimination one of their priorities.

They believe, as do we, that “it is crucial that Jewish Canadians be able to participate in potentially life-saving medical research, diagnostics, and clinical treatments without fear of discrimination, based on the results of genetic testing, by employers or insurance companies.” If you want to learn more or have questions about this, the BRCAinBC website is a great place to start.

P.S. In case you missed the Op Eds from Rabbi Infeld, and separately from Jewish Federations of North America’s Board of Trustees chair Mark Wilf and president & CEO Eric Fingerhut, we hope you will take a few minutes to read what these community leaders have to say. 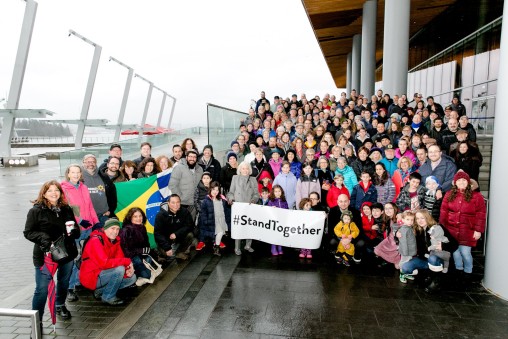 The community gathered to stand together against fear and hatred. 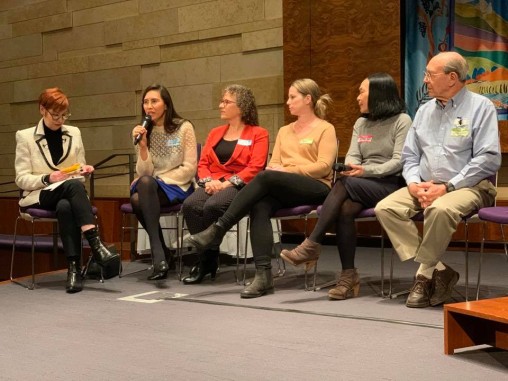 One in Forty event at Beth Israel