YOU helped the hostages escape. Here’s how.

When we heard about the hostage situation last Shabbat, we were absolutely horrified. That evening, we sent an update to the community, which you can read here. What we did not know at the time was how the hostages escaped. As details emerged, we realized that you played a role in making it possible.

In this interview, Jeffrey Cohen speaks of the training they received from SCN (pronounced scan), the Secure Community Network. SCN is the central organization dedicated exclusively to the safety and security of the North American Jewish community. It was founded in 2004, under the auspices of The Jewish Federations of North America and the Conference of Presidents of Major American Jewish Organizations. A portion of your Annual Campaign gift supports this work.

One of the things SCN does is provide security training to people involved with Jewish organizations. In speaking about this training, Jeffrey Cohen said, it “absolutely saved our lives.”

You can hear more about how in the interview. It is not just worth your while to watch this. It’s essential viewing. You can also listen to my interview with Spice Radio.

We made security a strategic priority and have invested significantly in this area over many years.

From security audits and upgrades to establishing our Community Security Advisory Committee, chaired by Bernard Pinsky, to providing training for staff and volunteers, our security work has evolved over time and now includes cybersecurity.

Having a senior professional in place is one of the most important things we have done.

Our director of security, Daniel Heydenrych-Davis, plays a key role in building relationships with law enforcement and providing training and expertise. Over the next few weeks, he will provide refresher training to people at local Jewish organizations who want to sharpen their skills.

He will also facilitate a meeting between the Rabbinical Association of Vancouver and the Vancouver Police Department to talk about community security. I want to say a special thank you to the VPD and other local law enforcement agencies for conducting increased patrols at Jewish organizations last Shabbat.

Daniel joined our advocacy agent, the Centre For Israel and Jewish Affairs, to participate in security meetings hosted by The Honourable Marco Mendicino, Minister of Public Safety, shortly after the hostage situation, and we are glad to hear that the federal government is open to considering expanding security support for Jewish buildings.

We also want to share this heartfelt letter from Taleeb Noormohamed MP for Vancouver-Granville, and this video from Prime Minister Trudeau.

When incidents in other communities take place on Shabbat, you may be following the news and wondering why you have not heard from us. As long as there is not an increased threat to our own community, we will wait until Shabbat is over to update you.

We want to share the good things that happened around the Jewish world this week, too.

The first is the consensus adoption of the U.N. Resolution on Holocaust Denial and Distortion, which "urges all Member States to reject without reservation any denial or distortion of the Holocaust as a historical event.”

The resolution comes just days before International Holocaust Remembrance Day on January 27, and you can raise awareness by posting a photo of yourself on social media using #WeRemember.

The second is that we have delivered nearly 1,500 N95 masks to frontline workers in our community!

Knowing that these masks are in high demand, we purchased a supply and then teamed up with Michael Sachs, executive director of JNF Pacific Region, who secured a donation of 1,100 masks from Vitacore. Together, we delivered them to staff at the five day schools, some of the supplementary schools, the JCC, Jewish Family Services, Louis Brier, the Peretz Centre and the Jewish Museum and Archives of BC.

And last but not least, we want to leave you with a celebration.

We are proud to be part of the launch of Unistream’s new entrepreneurship centre in our partnership region of the Upper Galilee. Teens there are the future leaders of that community, and we are here to help them realize their full potential. Michelle Pollock, chair of our Israel and global Engagement Committee, said that this video of the ceremony “captures the pride, joy and enthusiasm of the participants and community.” And what can be better than that? 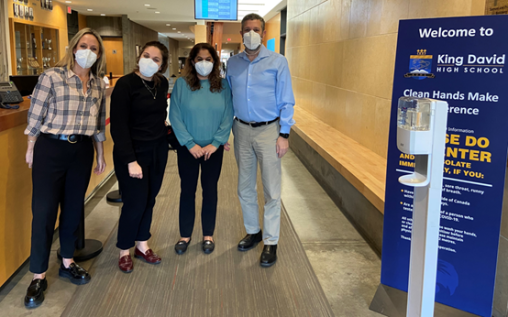