50 years of Lion of Judah

Today marks the inaugural Black Excellence Day, and we want to take this moment to say that our Jewish Federation stands in solidarity with Black Canadians today and every day. They expected to reach more than 10,000 people with this morning’s online event, many of whom are students. It was very powerful to hear people share their experiences and their pride. Kol hakavod (all the respect) to everyone involved. You can learn more here.

We have long believed that the diversity of our community is one of our greatest strengths.

That said, like many organizations, there are areas in which we need to improve. Recently, a donor brought to our attention that we do not have a gender neutral option on our online forms. We quickly went to work and added an Mx option. This change is being flowed through all of our online forms, so if you don’t see it on a particular form that you use yet, please know that it is coming. Many thanks to the donor who contacted us and to Elizabeth Shushkovsky on our Annual Campaign team for responding quickly.

When it comes to the Annual Campaign, much has changed in the 50 years since the Lion of Judah international recognition society was formed.

Celebrating women who make an annual gift of $5,000 or more, Lion of Judah began in the early 1970s, when Norma Kipnis Wilson z”l and Toby Friedland z”l first challenged the Miami Jewish Federation’s  women’s division to increase their fundraising goal to a million dollars. It was unprecedented and, quite frankly, a bit controversial. Not only was that a massive goal for the time, but it was not entirely commonplace then for women to make financial decisions for their households.

Today, we have 205 Lions of Judah in our community, led by co-chairs, Josephine Nadel and Karly Leipsic. Together with over 18,000 Lions worldwide the group is emblematic of the power women have to make a difference through their tzedakah.

One area where we are making a difference as a community is in our partnership region of Northern Israel.

Part of our strategic investment in the region is in developing a pipeline of future leaders by supporting Galil-UP. Through the program, high performers from various sectors are trained to become active, influential leaders in the region for the long term.

The second cohort graduated on Sunday, and members of our Israel and Global Engagement Committee (IGEC) participated virtually in their graduation ceremony. Randy Milner, an IGEC member said that attending via Zoom was “a great opportunity to make a stronger connection between the documents that we discuss and review at our IGEC Allocation meetings and the actual living people who are the beneficiaries in Israel.”

A few weeks ago, we announced two new initiatives in the areas of mental health and climate change, and we want to bring you some updates.

This week, over 140 people attended Project L’Chaim and The Wellness Institute’s comedy night to support mental health awareness and removing the stigma around mental health. What an amazing turnout! The event was the first in a series and was sponsored by the Diamond Foundation in loving memory of Steven Diamond z”l.

Also, this week, Shelley Rivkin, our vice president, global and local engagement, participated on a panel that featured Jewish Federations that are leading on climate change, which was moderated by Hazon. The timing on the cusp of Tu B’Shevat was particularly meaningful.

The holiday is a reminder of our responsibility for the natural world, so we want to leave you with this link from PJ Library with ways to celebrate no matter what age you are! 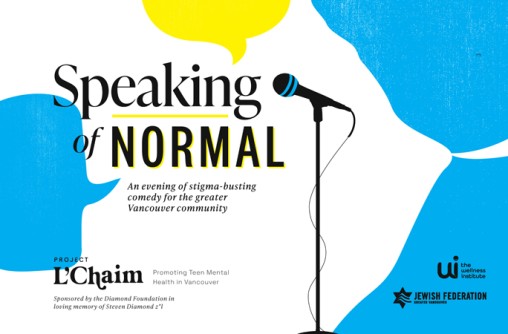