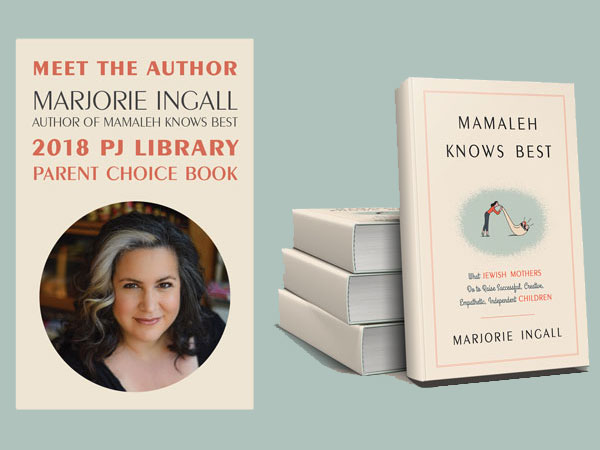 PJ Library, the international blockbuster program currently sending free high-quality books every month to 1,000 Vancouver-area Jewish children, does the same thing for their parents once a year, under the banner PJ Parents Selection. On Sunday, February 10th from 11:00 a.m.-12:30 p.m., one of those books’ authors appears at the Jewish Book Festival to discuss her acclaimed work, Mamaleh Knows Best: What Jewish Mothers Do to Raise Successful, Creative, Empathetic, Independent Children. The sharp, funny, insightful New York writer Marjorie Ingall is a regular contributor to the New York Times Book Review and Tablet Magazine, a journal of Jewish culture and ideas, and a former writer and producer at the Oxygen TV network.

Contrary to the stereotype of needy, narcissistic Jewish mothers that she describes as “hateful,” Ingall’s book makes it clear that “Jewish mothers have historically prized education, spirituality, and ritual,” have long believed in nurturing independence and personal responsibility, and have traditionally encouraged their children to live “ethical lives full of acts of social justice.” It’s Ingall’s view that “Jewish parenting methods are responsible for the outsized success of the Jewish people,” and she backs up the latter boast with statistics. Despite making up only 1 per cent of the world’s population, she writes, Jews comprise 170 of the 850 winners of the Nobel Prize; 21 per cent of Ivy League university students; 26 per cent of Kennedy Center honorees; 37 per cent of Academy Award-winning directors, and 51 per cent of Pulitzer Prize winners for non-fiction.

If a morning with this witty expert on raising successful, creative, empathetic, independent kids is on your to-do list, please note that admission is free and childcare will be provided.