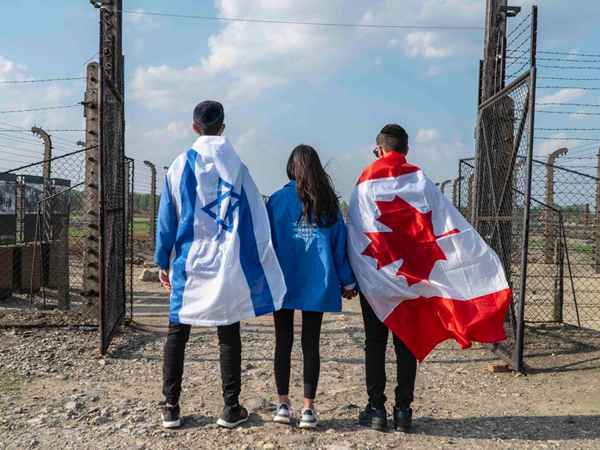 We’re excited to announce that a record number of 40 students will participate on March of the Living in April 2020. On this two-week trip to Poland and Israel they will become the next generation of witnesses to the atrocities of the Holocaust.

With such a strong response, a third chaperone will join the trip, and for the first time we will have a bus just for Vancouver participants, rather than sharing with another community.

This incredible increase in the number of students participating is a direct result of the hard work that the March of the Living committee has done under the leadership of Chair, Charlotte Katzen. The committee has reached out to schools, parents, and grandparents, and engaged program alumni in talks, presentations and personal stories. Charlotte says that, “over the last few years the students have been the strongest advocates, inspiring their younger peers to follow in their footsteps. We are proud to see upon return from each of the past March of the Living trips that the students express strong commitment to their Jewish identity and to Israel. The students are the future leaders of our community. “

Supporting Each Student
March of the Living strengthens Jewish identity in young adults, and it often lays the groundwork for a lifelong sense of belonging and engagement with the Jewish community – but the cost is high. Jewish Federation offsets program cost by $2,000 for each local participant, regardless the applicant’s financial situation, and provides additional financial support for families who need it.

March of the Living is a Powerful Experience
The March of the Living curriculum is designed to equip participants with basic knowledge and background on the Holocaust and Israel prior to their departure. Key themes include Jewish life before the war, history of Antisemitism, Nazism, the Final Solution, Zionism and the State of Israel, as well as their lives as Jews living in the Diaspora.

On the trip, students first travel to Poland, where they visit culminating in a three-kilometer march from Auschwitz to Birkenau on Holocaust Remembrance Day. The students then travel to Israel, where the hope for our future is tangible.

Past participants of March of the Living often describe it as one of the most significant experiences of their lives. Here is what two of them had to say:

See their full remarks in this interview here.