March of the Living Passes the Torch to a New Generation

March of the Living is widely acknowledged as one of the most powerful trips a young person can take part in. Our Jewish Federation is proud to help organize the trip and to support scholarships for local teens who are interested in participating. New this year is the opportunity for adults to participate on a separate March of the Living program. Whether you’re a teen or an adult, we encourage you to learn more and to sign up for this important program.

In April of 2015, a group of 80 teens, under the guidance of three chaperones and a Holocaust survivor, arrived in Poland for a two-week journey exploring Poland's tragic events and followed by the joy of celebrating the birth of the Jewish State on Yom Ha’atzmaut.

The mission of March of the Living is to pass the torch of Holocaust memory to new generations. The experience provides young people with an opportunity to bear witness to the Holocaust and to the stories of survivors, so that this important part of our collective history is never forgotten. It is also a unique opportunity to strengthen our children's Jewish identity and to strengthen their connection to Israel.

The March itself took place on Yom HaShoah, and we marched from Auschwitz to Birkenau with nearly 10,000 other young people. The March commemorates the death marches that the last surviving prisoners were forced to take, where many perished and only a few survived thanks to the liberation by the Allies. It is the most powerful event imaginable, and one that unites all young Jewish and non-Jewish people across the world.

By the end of the trip, these beautiful young people were so open in their expression of their deepest and most profound insights and emotions. They were no longer afraid to show their vulnerability, because the support that they received from each other throughout the trip was absolutely unconditional. It was a beautiful sight and a privilege to be a part of.

The commitment to Judaism and Israel that the participants acquire on this trip is so clearly represented in the following statements by March of the Living participant, Barbie Clark:

…For me, March of the Living created an emotional connection to my tradition, enabling me to understand and appreciate the importance of remembering our history.

During the trip, we witnessed firsthand the magnitude of mass destruction that occurred during the Holocaust. As we traveled around the country, we were constantly reminded of these horrors in every city, town, and community that we visited. At the height of Auschwitz’s productivity, it was able to murder and cremate up to 12,000 Jews a day - a number greater than the mass of us who were able to complete the walk. To realize that every single one of us participating in the March could have been destroyed in the space of one day, defies understanding and description. Also, at Majdanek, we were witness to a horrifying monument containing ashes and bones of... 20,000 Jews killed in the Nazi’s Fall Festival of 1943. This monument is alarmingly large, reiterating the magnitude of what occurred. I found this terrifying and incomprehensible.

The horrors witnessed in Poland are to be contrasted with what I experienced in Israel. While in Israel, I had the unique privilege to witness both Yom HaZikaron - Israel’s Remembrance Day for its soldiers - and Yom Ha’atzmaut, Israel’s birthday. On Yom Ha’atzmaut, the entire country is in celebration - the euphoria is palpable. Despite the sadness one is left with after (bearing) witness, I was left with contagious optimism and hope. Hope for a future without enemies; hope for the Jewish people and the Jewish nation surviving despite all previous oppression.

The entire experience created for me a new sense of being connected to Judaism, in a way I never thought possible….. The trip symbolized for me all (the) adversity, intolerance, and persecution of Jewish people yet at the same time creating a sense of survival and the possibility of a better future, for not just the Jewish people but for all mankind….

I encourage you to consider sending your children on this trip. It is an investment you will not regret. 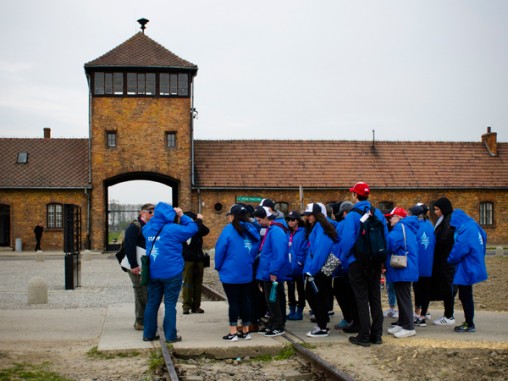