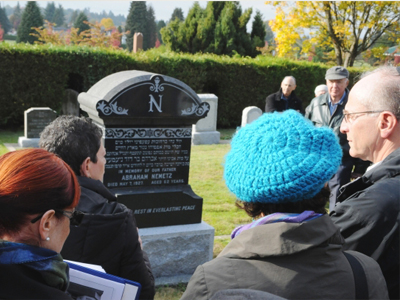 What started out as a restoration project has led to the discovery of people and stories long forgotten. In October 2012, Shirley Barnett initiated the Jewish Restoration Project at Mountain View Cemetery with the backing of The Schara Tzedeck Cemetery Board.  The purpose of the project was fourfold: research and document the names of all those interred in the cemetery, stabilize and restore the headstones, refurbish the grounds and add amenities and educate the community with walking tours and educational programming.

Mountain View Jewish Cemetery on 33rd & Fraser St, founded in 1892, was the original Jewish cemetery in Vancouver and is the key to unlocking early Vancouver ‘s Jewish history. Family names such as Gintzburger, Letvinoff , Forcimer, Weaver, and many others have left an unforgettable mark on the Jewish community, yet sadly their stories are largely unknown. Their descendants, if there are any, are no longer Jewish or cannot be found. Nevertheless, there are other families whose relatives are living and passionate about being connected to their early pioneer roots. Descendants of Zebulon Franks, Sarah Haniford, Abraham Grossman, Baby Kulimovitz, Israel Camerman , Leon Melekov and John Herman, to name a few, have come forward to get involved in this historic restoration project.

Norman and Gordon Franks are well aware of the important contributions made by their grandfather, Zebulon Franks, towards establishing an orthodox community in Vancouver.  Marion Pollack became aware of the importance of her great grandfather Abe Grossman; and how interesting is it that Marilyn Granas, who was Shirley Temple’s stand-in and movie double, is the granddaughter of Leon Melekov, the developer of Vancouver’s St. Regis Hotel.  Otto E .Bond, the first person buried in 1892, thought to be an indigent homeless man, was a poet and quite a ladies’ man. He was found in Gastown with a revolver in his room!

These are only a few of the stories now surfacing about those buried at Mountain View.

As a result of research and documentation, it was discovered that 147 burials were not marked, and of those, 60 were babies. Consequently, a ceremony was held in October 2013 to recognize these people and place temporary markers at each gravesite. The City of Vancouver, which owns the Mountain View Cemetery, including the land which the Jewish section occupies, kept records of all the burials, which is why we know the name and location of each grave. The ceremony was very well attended and all the publicity surrounding this event aroused the interest of descendants who, until that time, did not know they had family members buried at the cemetery. These descendants have become involved in this restoration work - from making a donation, to placing a permanent stone where there wasn’t one.

One such example is the story of Sarah-Goldberg-Haniford whose family, after 90 years of not knowing her whereabouts, on August 3rd 2014, placed a headstone in her memory to be forever remembered. “You live as long as you are remembered” a Russian Proverb, was cited by Alice Campbell, Sarah’s granddaughter, at this unique unveiling ceremony.  Twenty-five family members, including grandchildren and great grandchildren, none of who ever knew Sarah, Rabbi Rosenblatt and Reverend Joseph Marciano, along with members of the Vancouver Jewish Community, were witness to the unveiling of Sarah’s headstone. Many of her family members had not seen each other in at least 15 years! Sarah had brought them together not only to recognize her life, but also to rekindle their connections to each other and to Judaism.

Historically, this project has ignited much curiosity and interest. There are regularly scheduled waking tours through the cemetery, highlighting the lives once lived by these pioneers. King David High School students have researched some of these pioneers and were amazed by what they discovered. One student discovered an unknown family member buried in the cemetery.

With the advent of the opening of the new cemetery in New Westminster in 1926, Mountain View became second choice and somewhat forgotten. As was the custom in the early 1900s, family patriarchs would reserve a number of plots for family members, until such time as they were needed. Years passed and people moved away, leaving a large number of unoccupied reserved plots. Genealogical research into locating descendants of the owners of these reserved plots has been rewarding in some cases, with family members discovering they now have a historic connection to Mountain View Cemetery. In other cases, with no descendants to claim ownership, some of these plots will eventually become available for use. This cemetery, very rarely used nowadays, is being rejuvenated and will once again be a “living” and “working” cemetery.

Construction is underway with amenities which include a “Kohanim” bench outside the gates of the cemetery, as well as 2 benches inside the gates. A replica of the historic entrance gate, garden walls on either side of the entrance gate, a washing basin and pebble basin, and pathways and family plot curbing are being uncovered and restored.

A state-of-the-art technology program known as “Admired Life” is being incorporated into the workings of this cemetery. This program will enable visitors to the cemetery to access information about a person buried there via smartphone.

Funding for this restoration project has come from several sources including the Jewish Community Foundation, Jewish Federation of Greater Vancouver, Schara Tzedeck Cemetery Board, the Heritage Legacy Fund of B.C. and family foundations and individual donors. The goal is to fund the restoration work needed now as well as provide for an endowment for maintenance of the work in perpetuity.