A devastating 7.8 magnitude earthquake and subsequent strong aftershocks have claimed well over 4,000 lives and caused widespread destruction in Kathmandu and the surrounding region. Our trusted partners are assessing the unfolding situation on the ground and ensuring survivors’ immediate needs are addressed.

Your donation will be matched by the Canadian Federal Government.

100% of your donation will support the critical rescue and relief efforts of our trusted partner, the Joint Distribution Committee (JDC). Our efforts will be combined with those of other Jewish communities in Canada through Jewish Federations of Canada-UIA.

How We Are Helping
JDC has already mobilized their emergency teams and is working with local authorities, the Nepalese and Indian governments, and global partners. Their critical focus will be on providing medical relief and supplies in the hardest-hit areas.

Providing Non-Sectarian Humanitarian Relief
JDC will apply their global expertise in providing immediate relief and long-term assistance to victims of natural and man-made disasters — most recently in the Philippines, Haiti, Japan, and South Asia after the Indian Ocean Tsunami — to furnish urgent aid to survivors of the Nepal earthquake and rebuild infrastructure and community life in the months ahead.

Israelis in Nepal and IDF Response
As of Saturday, April 25, 2015 approximately 2,000 Israelis were in Nepal and Israel’s Ministry of Foreign Affairs has said that at least 250 of them are still “out of contact,” their fate unknown. Hundreds of Israelis spent the previous night in the courtyard of the Israeli embassy and in the Chabad House in Kathmandu, and are awaiting evacuation aboard El Al jets now en route.

Meanwhile, an IDF advance team of about a dozen officers arrived in Kathmandu on Sunday to assess needs and a larger medical mission of Israel Defense Forces (IDF) and Magen David Adom personnel departed Israel Sunday morning. The IDF is preparing to send a large delegation of over 200 medical and search and rescue people with a mobile field hospital for approximately two to three weeks. 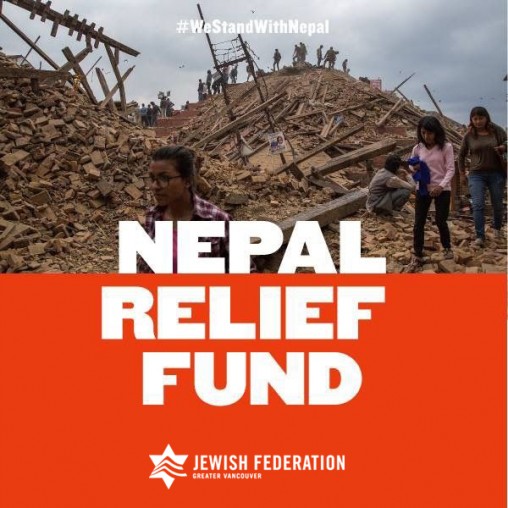