Take Action: Thank Premier Horgan for Fighting Antisemitism in BC

We applaud Premier Horgan’s announcement today that British Columbia will use the International Holocaust Remembrance Alliance (IHRA) working definition of antisemitism “as an important non legally binding educational tool to help us determine what is, and what is not, antisemitic.” This, he said, “allows us to work toward a society that is better for all British Columbians.”

Premier Horgan also reiterated the province’s support of our community: “Today and every day, our government stands with British Columbia's Jewish community in the fight against antisemitism as we always have and always will.” Click here to read his full letter.

The IHRA definition provides a critical framework that can help guide BC government institutions in understanding contemporary forms of antisemitism, such as Holocaust denial, or accusing Jews of being more loyal to Israel than to the interests of their own nations.

Year after year, Jewish Canadians continue to be the most frequently targeted religious minority group for hate-motivated crime. Here in BC, the use of the IHRA definition will provide the Jewish community with much-needed relief to victims of hate crimes and hate related incidents.

Take action today and thank Premier Horgan and the provincial government. Click here to send a letter of appreciation.

For more information on this and other aspects of our work, subscribe to updates from Jewish Federation and CIJA. 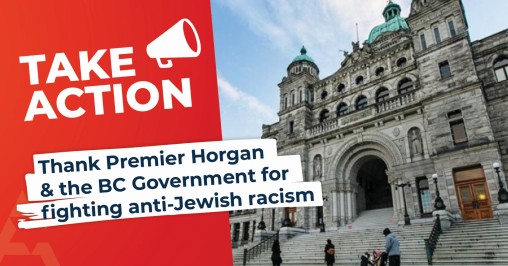